Army Abducts One Palestinian, Injures Several Others, In Jenin 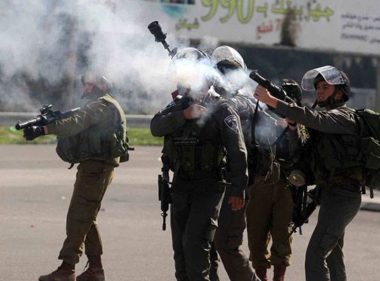 Israeli soldiers invaded, on Wednesday at dawn, the northern West Bank city of Jenin, and nearby towns, broke into and searched many homes, and abducted one Palestinian. The soldiers also injured several Palestinians, and caused damage to cars and homes, in Jaba’ town, south of Jenin.

Media sources in Jenin said the soldiers abducted a young man, identified as Sultan Bassam Hamdan, 31, from Jenin city, after summoning him for interrogation in Salem military base.

Clashes took place in Jaba nearby town, and the soldiers fired many gas bombs, rubber-coated steel bullets and live rounds, including at home, causing dozens of residents to suffer the severe effects of teargas inhalation.

The soldiers resorted to excessive use of force against the Palestinians, assaulting them while searching their homes, and deliberately smashing their belongings in addition to using military dogs in the searches.