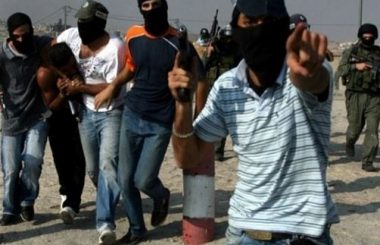 Israeli soldiers abducted, overnight and at dawn Friday, three Palestinians in Bethlehem governorate, and four in Biddu village, northwest of Jerusalem, in the occupied West Bank.

The soldiers also installed a roadblock on the main entrance of Beit Fajjar town, south of Bethlehem, and abducted Eyad Mahmoud Taqatqa, 32, and Wajdi Kamal Thawabta, 27.

In addition, many military jeeps invaded, on Thursday evening, the town of Biddu, northwest of occupied Jerusalem, and clashed with many youngsters for several hours.

Undercover officers also infiltrated into the town, and kidnapped four young men during the ensuing clashes. The identities of the abducted Palestinians remained unknown at the time of this report.

Furthermore, the soldiers abducted four Palestinians from Ya’bad town, southwest of the northern West Bank city of Jenin, and one from Silat al-Harithiya, west of Jenin, while he was working in Bisan.