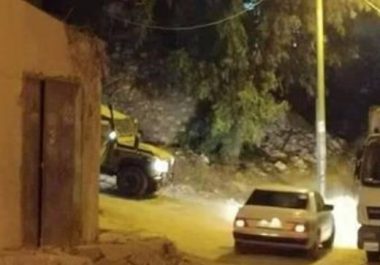 Dozens of Israeli soldiers invaded, on Friday at dawn, Ya’bad town, southwest of the northern West Bank city of Jenin, searched and ransacked many homes, and abducted thirteen Palestinians, including children.

The WAFA News Agency has reported that the soldiers invaded many neighborhoods in the town, before breaking into dozens of homes and searching them.

The soldiers interrogated many Palestinians after storming their homes, and abducted the seventeen Palestinians.

It is worth mentioning that the soldiers also invaded olive orchards in the village, and surrounded many homes near them.

The invasion led to clashes with many youngsters, who hurled stones at the military jeeps, while the soldiers fired many live rounds, gas bombs, and rubber-coated steel bullets.

Medial sources said many Palestinians, including children, suffered the effects of teargas inhalation, and received the needed treatment by local medics.

In addition, the army abducted seven Palestinians; three from ‘Aida refugee camp, north of Bethlehem, and four in Biddu village, northwest of Jerusalem, in the occupied West Bank.

Furthermore, the soldiers abducted four Palestinians from Ya’bad town, southwest of the northern West Bank city of Jenin, and one from Silat al-Harithiya, west of Jenin, while he was working in Bisan.