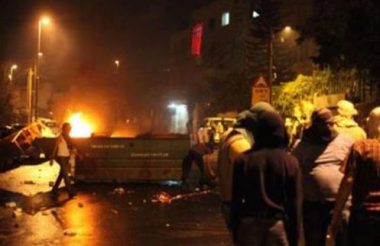 Media sources said the soldiers accompanied buses filled with Israeli colonialist settlers to the historic site, and fired dozens of live rounds, rubber-coated steel bullets and gas bombs at Palestinians, protesting the invasion into their communities.

Medical sources said the soldiers fired live rounds at the car of resident Mohammad Abdullah Mer’ey, while he was heading to the Central Vegetables Market, wounding him in his right arm, and his son in his shoulder, before they were rushed to Rafidia Governmental Hospital.

The two Palestinians are from Na’ja village, in the West Bank’s Northern Plains, and were heading to the Central Market in Nablus to cell the produce of their lands and cattle.

In addition, the soldiers shot 26 Palestinians, including a journalist, with rubber-coated steel bullets.

One child, identified as Yamen Allan Shami, 14, was shot with a rubber-coated steel bullet in his head, and a young man, Tareq Abdullah Nabi, 18, was shot with a live round in his right leg.

At least seventeen Palestinians suffered the severe effects of teargas inhalation and received the needed treatment.

The soldiers also invaded Balata refugee camp and attacked protesters in the Al-Quds and the Schools Streets, before abducting five Palestinians, identified as Mohammad Ghassan Abu Hweila, Sa’id Abed Majdalawi, Sobhi Jawabra, Hani Abu Ziyada, in addition to Faraj Mustafa Abu Leil, who was shot with a live round in his right leg, before the soldiers detained him.

Furthermore, the soldiers invaded and searched many homes, including the home of a political prisoner, identified as Omar Abu Leil, in addition to the homes of Daoud Abu Bassam, Anas Abu Hamada and Ata Hannoun.

Palestinians believe that Joseph’s Tomb is the funerary monument to Sheikh Yusef Dweikat, a local religious and social figure. Others believe that the tomb belongs to the Biblical patriarch Joseph, revered by Jews, Samaritans, Christians and Muslims alike, but remains off-limits to the Palestinians.

On its part, the Palestinian Information Ministry said the repeated invasion into Nablus to accompany the settlers to Joseph’s Tomb, and the Ibrahimi Mosque in Hebron, in addition to the escalating invasions into the Al-Aqsa Mosque in occupied Jerusalem, require immediate international intervention and protection to the Palestinian people, and the holy sites.

It added that, on Monday, Israeli Minister of Economy and Industry Eli Cohen, invaded the Ibrahimi Mosque in Hebron, accompanied by many officials and colonialist settlers, and stated that ” provocative acts require Arab, regional and international protection to all holy sites in occupied Palestine, including Jerusalem, in order to avoid massacres and bloodshed, similar to the massacre of Muslim worshipers in the Ibrahimi Mosque in 1994.”