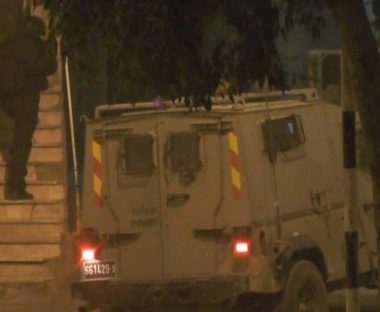 Israeli soldiers abducted, on Tuesday at dawn, at least fourteen Palestinians, during extensive and violent searches of homes in occupied East Jerusalem. The soldiers also abducted two Palestinians near Nablus.

Dozens of soldiers invaded Shu’fat refugee camp, in the center of Jerusalem, and the ar-Ram town, north of the city, before storming and searching dozens of homes, and abducted fourteen Palestinians.

Another Palestinian, identified as Anan Mohsin Jaber, 24, from Anabta town, east of the northern West Bank city of Tulkarem, was also abducted at Za’tara roadblock.

In related news, the soldiers abducted one Palestinian near Hebron, in the southern part of the occupied West Bank, and installed a military tower.