Army Demolishes A Home; Two Families Forced To Demolish Their Homes, In Jerusalem 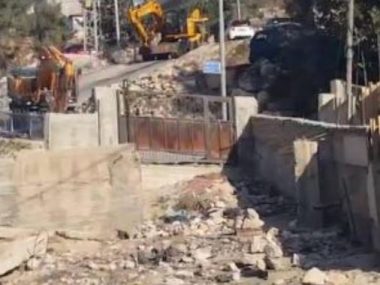 Israeli soldiers demolished, Tuesday, a Palestinian home in Beit Hanina neighborhood, north of occupied East Jerusalem, while two families were forced to demolish their own homes, in Sur Baher and Silwan.

The soldiers invaded Beit Hanina neighborhood, after surrounding and isolating it, and demolished a home, under the pretext of being built without a permit.

The army prevented the Palestinians from entering the area and removed local journalists, before demolishing the property.

On Monday evening, resident Ibrahim Amira had to demolish his home in Sur Baher town, southeast of Jerusalem, to avoid fines exceeding 90.000 Shekels.

The Palestinian said he filed numerous requests to license his home, which he built, two years ago, on his own land to shelter himself, his wife and four children, but his requests were denied, and the City Council decided to demolish it just as he and his family moved in.

Amira filed various appeals with Israeli courts, including the Hight Court, but all of his applications were denied.

In Silwan town, south of the Al-Aqsa Mosque in Jerusalem, resident Wael Shweiki and his family had to demolish their two under-construction homes after the City Council issued demolition orders and threatened to impose excessively high fines and fees if its workers are the ones who demolish the property.

The family said it started the construction in early May of this year, and their applications for construction permits were denied.

On Monday morning, the demolished Palestinian agricultural and commercial buildings in the Hizma neighborhood of Jerusalem.