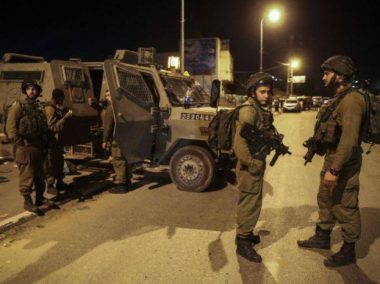 The Palestinian Prisoners’ Society (PPS) has reported that Israeli soldiers abducted, on Monday at dawn, six Palestinians in the West Bank governorates of Jenin, Tulkarem and Hebron, in addition to detaining, and interrogating, six others, and wounding one, near Nablus.

The Jenin office of the PPS, in northern West Bank, said the soldiers invaded many homes in Jenin city, Jenin refugee camp, and Zabbouba town, and abducted two Palestinians identified as Sabri Mohammad Sabri, and Yazan Hannoun, from Jenin and its refugee camp, after violently searching their homes.

The soldiers also stopped and searched dozens of cars at the junction between Rommana and Zabbouba towns and interrogated many Palestinians while inspecting their ID cards.

In related news, the soldiers invaded the al-Lubban ash-Sharqiya village, south of the northern West Bank city of Nablus, and detained six Palestinians for several hours, after invading their homes and searching them.

The soldiers took them to various locations, and interrogated for them several hours, before releasing them.

The soldiers also shot Hamada Khaled Hanani, 24, with a live round in his right tight, after army attacked many Palestinians who protested the invasion.

In addition, the soldiers invaded the Saff Street, in the center of Bethlehem city, and abducted a former political prisoner, identified as Islam ‘Adel Hijazi, 19.

In related news, the soldiers invaded many Palestinian communities in several parts of the southern West Bank governorate of Hebron, searched dozens of homes, and abducted six Palestinians, in addition to summoning two others for interrogation, and installing roadblocks.

On Sunday evening, the Israeli army said it arrested one Palestinian who was reportedly attempting to enter Itamar illegal colony, near Nablus, and added that the soldiers were searching for another Palestinian.

The army initially claimed that the detained Palestinian was wearing a military uniform, but it became apparent that the two were trying to hunt birds with slingshots.

The military added that it was investigating the incident, and that the abducting Palestinian was moved to an interrogation facility.