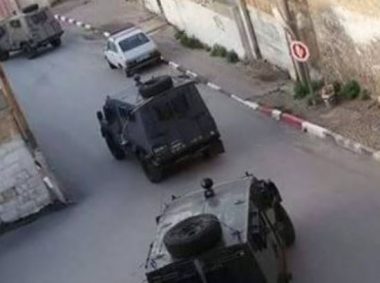 Israeli soldiers invaded, on Monday at dawn, many Palestinian communities in several parts of the southern West Bank governorate of Hebron, searched dozens of homes, and abducted six Palestinians, in addition to summoning two others for interrogation, and installing roadblocks.

The Hebron office of the Palestinian Prisoners’ Society (PPS) said the soldiers invaded homes in Yatta town, south of the city, and conducted violent searches of homes, before abducting Mohammad Shehda, Abed al-Ba’louj and Jibril al-Ba’louj.

It added that the soldiers also invaded and searched homes, and workshops, in Halhoul town, north of Hebron, and abducted Mohammad Sa’adi Mansour.

In addition, the soldiers invaded homes in Shiokh town, northeast of Hebron, and abducted Hamdan ‘Oweidat.

In related news, the soldiers invaded many homes in Hebron city, Bani Neim and as-Sammoa’ towns, and summoned Eyad Mousa Daghamin, Ibrahim Salem Hreizat and Mahmoud Mousa Hreizat, for interrogation in Etzion military base and security center, north of the city.

In Hebron city, said the soldiers invaded many neighborhoods, and installed a roadblock at it northern entrance, in addition to roadblocks at the entrances of Sa’ir and Halhoul towns, before stopping and searching dozens of cars, and interrogated many Palestinians while inspecting their ID cards.