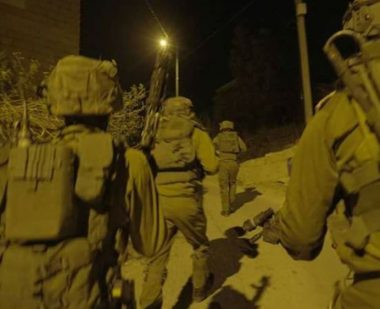 The Israeli army abducted, on Sunday at dawn, sixteen Palestinians after the soldiers stormed and searched many homes in several parts of the occupied West Bank, while one of them was taken prisoner at a military roadblock.

Media sources in Ramallah, in central West Bank, said the soldiers abducted Qaddoura Barghouthi, from Beit Rima town, northwest of the city, after stopping him at a military roadblock on the main entrance of the nearby Nabi Saleh village. Qaddoura is the brother of Bara’, who is a political prisoner in Israeli jails.

It is worth mentioning that Theeb is the father of Dalal Lulah, 9, who died at an Israeli military roadblock south of Nablus, on December 29th 2017, when the soldiers prevented her from reaching the hospital while she was suffering a respiratory attack, while Ali is a former political prisoner who was released just two months ago.

The Bethlehem office of the Palestinian Prisoners’ Society (PPS) said the soldiers abducted Nawawra to pressure his brother, Zakariya, to turn himself in to the army.

In Qalqilia, in northern West Bank, the soldiers searched homes and abducted Anas Malek Daoud, and Aref Salim from Azzoun town, east of the city.

The army also invaded many homes, and interrogated several Palestinians, in Kafr Saba neighborhood in Qalqilia.

In Beit Ummar town, north of the southern West Bank city of the city, the soldiers invaded and searched several homes, and abducted Abdullah Ahmad Ekhlayyel, 21, and Hussein Ali ‘Aadi, 20, before moving them to the nearby Etzion military base.

The PPS office in Hebron said the soldiers have abducted thirteen Palestinians, including five children, in Beit Ummar, since the beginning of this month.

Another Palestinian, identified as Farid Hmeidan al-‘Oweiwi, was taken prisoner from his home, after the soldiers stormed and ransacked it, along with many homes in the southern area of Hebron city.

Furthermore, the army abducted Mohammad Azzam Natsha from his home, in the Salam area in Anata town, northeast of Jerusalem.

In a statement, the Israeli army said its soldiers have arrested sixteen Palestinians in several areas of the West Bank, and took them to a number of interrogation facilities, and claimed that the soldiers found and confiscated two weapons during searched in the town.

In the Gaza Strip, Israeli navy ships fired many live rounds at Palestinian fishing boats in Gaza territorial waters, in the northern part of the coastal region, forcing the fishermen away.