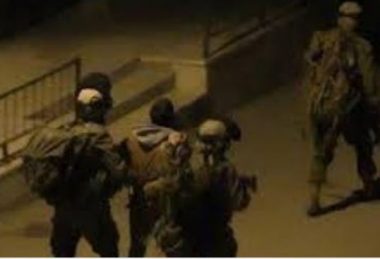 Israeli soldiers abducted, on Monday at dawn, thirteen Palestinians from their homes, in several parts of the occupied West Bank.

They added that the soldiers abducted Othman Zeid and Abdul-Salam ‘Aabed, and took them to an unknown destination.

In Bethlehem, the soldiers invaded and searched homes in the al-Khader town, south of the city, and abducted Daoud Salah, in addition to three former political prisoners, identified as Mohammad Salah, Tha’er Salah, Osama Salah and Ahmad Ghneim.

It is worth mentioning that the soldiers abducted, on Sunday evening, Fateh Movement secretary, in Shu’fat refugee camp, in occupied Jerusalem, Mahmoud Sheikh, after stopping him at Hizma military roadblock, north of the city.