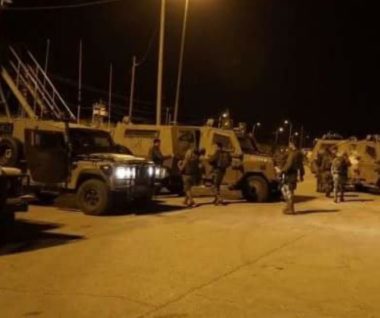 Israeli soldiers abducted, on Monday at dawn, thirteen Palestinians, from their homes in several parts of the occupied West Bank, the Palestinian Prisoners’ Society (PPS) has reported.

The PPS said the soldiers invaded and ransacked dozens of homes across the West Bank, including occupied East Jerusalem, and interrogated the residents while inspecting their ID cards, before abducting thirteen, including siblings.

In Qalqilia, in northern West Bank, the soldiers abducted Jamal Jamil Teetan, 23, and his brother Majdi, 20.

The soldiers stormed and ransacked many homes in Hebron, deliberately causing damage to equipment and furniture.

In addition to storming and violently searching many homes in Hebron, the soldiers invaded a company, owned by Engineer Nasr Hasan Ekhlayyel, specializing in sanitary products and medicine, and searched it.

Many homes were also invaded and searched in Ethna town, west of Hebron, and the soldiers installed roadblocks at the main entrances of Sa’ir, Ethna and Halhoul, in addition to several roads leading to Hebron city, before stopping and searching dozens of cars and interrogated many Palestinians while inspecting their ID cards.