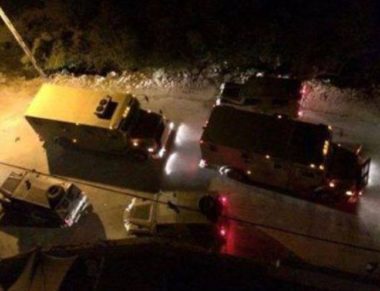 Dozens of Israeli soldiers invaded, on Wednesday at dawn, the Deheishe refugee camp, south of the West Bank city of Bethlehem, abducted three Palestinians and injured two others.

The soldiers invaded the refugee camp, and opened fire at dozens of protesters, wounding two young men with live fire, and caused several others to suffer the effects of teargas inhalation.

Medical sources said one of the wounded Palestinians was shot with a live round in his knee, and the other in his right thigh; both were rushed to a hospital in Bethlehem, suffering moderate wounds.

Furthermore, the soldiers invaded and searched several homes in the refugee camp, and abducted Wisam Shawabka, in addition to Mohammad Abu Hadrous and his brother Shadi.

On Tuesday at night, the soldiers shot a Palestinian child, identified as Mahmoud Salah Amro, 16, with a live round in the knee, after the army invaded the al-Khader town, south of Bethlehem.