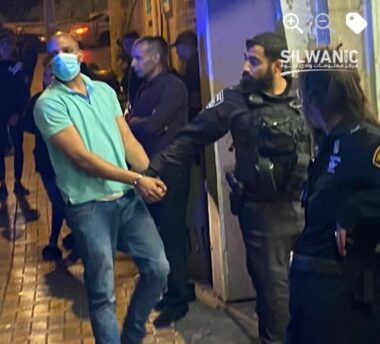 Israeli soldiers abducted, on Wednesday at night, three Palestinians, including a teenage boy, in addition to assaulting many young men, in the occupied Palestinian capital, Jerusalem, in the West Bank.

Eyewitnesses said undercover soldiers ambushed and assaulted Mahmoud Ashayer, 17, in the at-Tour town, in Jerusalem, before taking him to an unknown destination.

They added that the undercover soldiers infiltrated into the town during protests that erupted after regular army units invaded it.

In addition, the soldiers abducted a young man, identified as Samer Abu Aisha, in Salahuddin Street, in Jerusalem, and took him to an interrogation facility.

In related news, the soldiers assaulted many young Palestinian men in Bab al-Amoud, and fired gas bombs and concussion grenades at them, in addition to attacking street vendors, and destroying their goods.

Furthermore, the soldiers invaded the ar-Ram town, north of Jerusalem, and abducted a young man, identified as Adnan Harbawi.