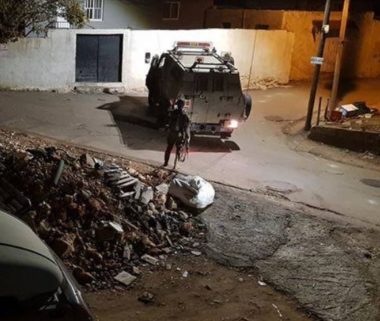 The Jenin office of the Palestinian Prisoners’ Society (PPS) has reported that the soldiers invaded and ransacked several homes, and abducted Riyad Mohammad Kabaha, in addition to his brother, Eyad, and Mahdi Jihad Kabaha.

The soldiers invaded and violently searched dozens of homes in the town, causing excessive property damage, and interrogated the families while inspecting their ID cards.

The soldiers also illegally confiscated three cars, parked in front of homes in the town, and took them to an unknown destination. Furthermore, the soldiers conducted extensive searches along Jenin-Nazareth Road, and the agricultural lands on both sides of the road, in addition to installing several roadblocks in areas, northeast of Jenin.

Also at dawn, the soldiers abducted a young Palestinian man from Hizma town, northeast of occupied Jerusalem, and abducted one Palestinian in Hebron, in southern West Bank, during extensive and violent searches of homes.