Army Abducts Three Palestinians From Jenin And Hebron, Injure One 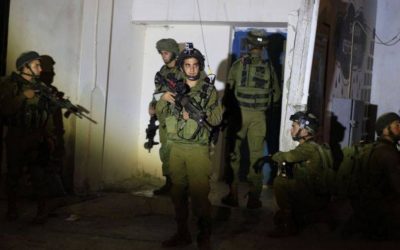 Israeli soldiers abducted, earlier Tuesday, one Palestinian near the northern West Bank city of Jenin, and two others from the southern West Bank governorate of Hebron. On Monday evening, the soldiers shot and injured a Palestinian driver near Hebron.

Media sources in Jenin said the soldiers invaded Jilqamous village, east of Jenin, and abducted Motea’ Jamil al-Hajj, after storming his home and violently searching it.

Furthermore, the soldiers installed a roadblock on the Jenin-Nablus road, before stopping and searching dozens of cars, and interrogated many Palestinians while inspecting their ID cards.

The army also installed roadblocks on main roads leading to many towns, villages and refugee camps, in Hebron governorate, before stopping and searching dozens of cars, and interrogated many residents while inspecting their ID cards.

On Monday evening, the soldiers shot and injured a Palestinian man after opening fire at his car on the road between al-Karmel and Ma’on villages, in Masafer Yatta area, south of Hebron.

It remains unknown why the soldiers targeted the Palestinian car; the soldiers conducted searches in surrounding farmlands and areas, but were unable to locate him. The soldiers then closed all minor, and unpaved roads in the area, after surrounding it.

Furthermore, the soldiers abducted, overnight until dawn hours Tuesday, seven Palestinians, including five children and one woman, from their homes, in several parts of occupied East Jerusalem.

On Tuesday morning, the soldiers, accompanied by a military bulldozers, invaded Shu’fat refugee camp, northeast of Jerusalem, raising fears among the Palestinians of possible demolitions.