Army Abducts Three Palestinians In Bethlehem, One In Nablus 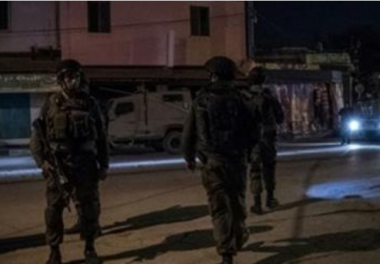 The Palestinian Prisoners’ Society (PPS) has reported that Israeli soldiers have abducted, on Tuesday at dawn, three young Palestinian men in the West Bank governorate of Bethlehem, and one in Nablus.

The Bethlehem office of the PPS said dozens of soldiers invaded the al-‘Azza refugee camp, north of the city, searched homes and abducted Karam Majed al-‘Amarin, 20.

It added that the soldiers also abducted Yousef Mahmoud Sheikh, 24, from Marah Rabah village, and Ehsan Hussein Taqatqa, 22, from Beit Fajjar, south of Bethlehem, after invading their homes and searching them.

The soldiers also invaded Teqoua’ town, east of Bethlehem, and clashed with dozens of local youngsters, who hurled stones at the military jeeps, while the soldiers fired gas bombs and concussion grenades.

In addition, the soldiers invaded many neighborhoods in the Old City of Nablus, and withdrew later.

Also at dawn, the soldiers abducted five Palestinians from their homes in Deir Abu Mashal village, northwest of Ramallah, in central West Bank.