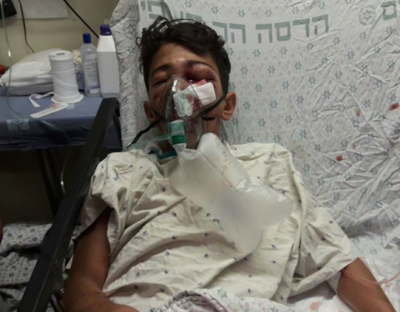 A 13-year old Palestinian boy suffered from a fractured eye socket, and total loss of one eye, after he was shot by Israeli police firing so-called ‘non-lethal weapons’ in al-Isawiya, in east Jerusalem.

Nur Hamdan, 13, also suffered from other facial injuries when he was shot. He was standing on the second floor balcony of his family’s home when Israeli troops fired a sponge-tipped metal bullet directly at his face.

He was taken to a local clinic and immediately transferred to Hadassah Hospital, the largest hospital in East Jerusalem. He is the 16th Palestinian to have lost an eye from this type of bullet, according to human rights groups. 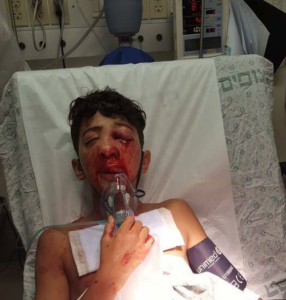 When police arrived in the neighborhood with armored vehicles and automatic weapons, they reported that Palestinian youth began throwing stones.

The police said they then fired sponge-tipped bullets and other so-called ‘non-lethal weapons’ into the area – including at the child in the second story balcony of his home.

Nisreen Alyan of the Association for Civil Rights in Israel told reporters from Ha’aretz news, “This is a dangerous weapon that has already taken the life of one teen and caused head injuries to dozens of people, including children. Some lost their sight. It’s unacceptable that people who are on their balconies or near a window shouldn’t be safe, and should be injured by sponge-tipped bullets fired contrary to police regulations”.

The National AE newspaper reported in 2016 that the sponge-tipped bullet, known as bullet model 4557, is “capsule-like in shape, the bullets have a hard plastic base and a rounded tip covered in hard black foam. Some six centimetres long and three centimetres wide, they are heavier than the previous model used. While official authorisation did not come until January 2015, police had in fact been using them since July 2014 as violence escalated and eventually led to that year’s war on the Gaza Strip. While not designed to be lethal, the sponge-tipped bullet’s ability to inflict heavy damage has raised concern. Israeli police regularly use such bullets during clashes in mainly Palestinian east Jerusalem.”

Mohammed Sonoqrot was killed by a sponge-tipped bullet in 2014. No officers were charged with misconduct of any kind. He was 16 years old.