Army Abducts Three Palestinians In Hebron, One In Jenin 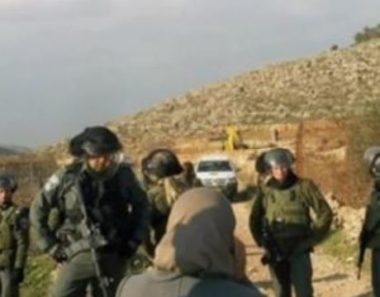 Israeli soldiers abducted, on Thursday at dawn, three young Palestinian men in Hebron, in the southern part of the occupied West Bank, and one in Jenin, in the northern part.

Furthermore, the soldiers invaded the Eastern Neighborhood in Jenin city, and abducted Sultan Kamal Sa’adi, after storming his home and searching it.

In related news, several army jeeps invaded Khallet Makhoul community, in the Northern Plains of the West Bank, and photographed the homes and structures.

It is worth mentioning that the village is subject to frequent invasions and violations, and many of its homes and structures were demolished several times; most recently two years ago.

In occupied Jerusalem, the soldiers invaded the al-Mintar area, in the Sawahra village, east of the city, and informed the residents of their intention to remove two protest tents, which were installed by the locals who were protesting a new illegal Israeli colonialist outpost on their land.