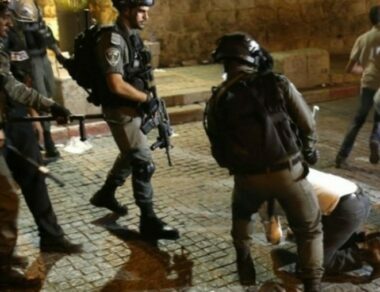 The soldiers abducted a young man, Shadi Abu Sneina, while walking in the Bab Huta area near the al-Aqsa Mosque.

The soldiers also abducted two young men in the Bab al-Amoud area when they tried to fend off an attack against them by illegal colonizers.

The soldiers also invaded many neighborhoods in the al-Isawiya town in Jerusalem and installed roadblocks.

On Sunday dawn, Israeli soldiers abducted three Palestinians, including a former political prisoner, from their homes in Hebron, and six in Bethlehem and Jerusalem.

In related news, the soldiers killed a Palestinian worker, Nabil Ahmad Taiseer Ghanem, 53, near the illegal Annexation Wall, south of Qalqilia, in the northern part of the Bank.