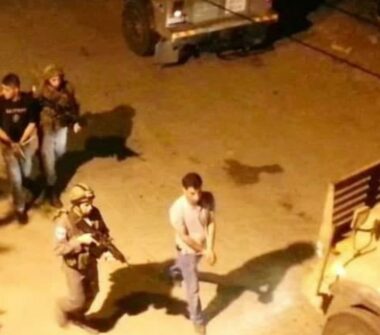 Montaser Sammour, the head of the Jenin office of the Palestinian Prisoners’ Society (PPS), said many army jeeps invaded the town, isolated behind the illegal Annexation Wall, and stormed an apartment building.

Sammour added that the soldier searched and ransacked several apartments and abducted thirteen Palestinian construction workers before moving them to an interrogation facility.

He also said that the army has recently escalated its violations against the Palestinian workers, especially in areas near the Annexation Wall, abducted many workers, and injured several others after attacking them with live fire for not obtaining permits to work in occupied Jerusalem.

It is worth mentioning that the army frequently attacks, chases, injures, and abducts Palestinian workers near the gates of the illegal Annexation Wall near Jenin and other parts of the West Bank.