Israeli Soldiers Attack Workers Near The Annexation Wall In Jenin 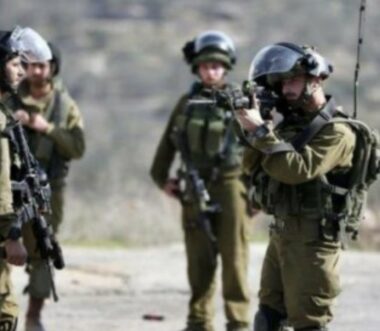 On Saturday dawn, chased and attacked dozens of Palestinian workers in several areas near the illegal Annexation Wall west of Jenin, in the northern part of the occupied West Bank.

The soldiers fired gas bombs and concussion grenades at the workers and chased them to remove them from the area.

The soldiers also invaded the al-Jabriyyat neighborhood in Jenin city and conducted massive searches of homes and property in the area.

On Friday evening, the soldiers installed many roadblocks near Jaba’, Arraba and Qabatia, and various roads to Jenin city before stopping and searching dozens of Palestinians and their vehicles. The soldiers also interrogated many while inspecting their ID cards.

It is worth mentioning that the army frequently attacks, chases, injures, and abducts Palestinian workers near the gates of the illegal Annexation Wall near Jenin and other parts of the West Bank.