Army Abducts Three Palestinians, Including Father And Son, In Nablus 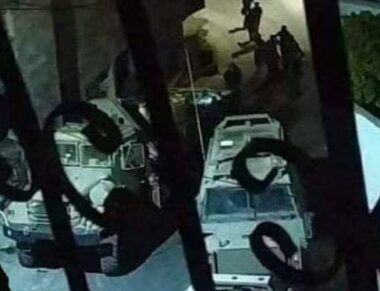 Israeli soldiers abducted, on Monday at dawn, three Palestinians, including a father and his son, in Qusra town, south of the northern West Bank city of Nablus, and at the southern entrance of Nablus city.

They added that the soldiers abducted No’man Qassem Kanaan, and his son, Adham.

Furthermore, undercover Israeli soldiers kidnapped a young man, identified as Fadi Yousef al-Qanni, after ambushing him at the southern entrance of Nablus city.

Also at dawn, the soldiers killed four Palestinians, and seriously wounded at least one, in Jenin, in northern West Bank, after the army and its undercover forces, invaded Jenin city and Jenin refugee camp, in the northern part of the occupied West Bank.