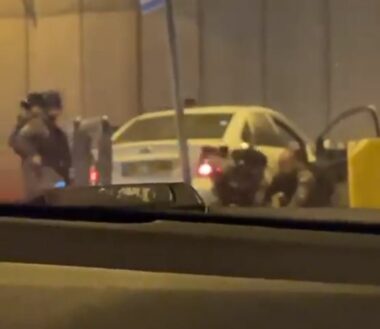 Israeli soldiers abducted, late on Thursday at night and on Friday at dawn, three young Palestinian men, including a former political prisoner, near Jenin and Jerusalem, in the occupied West Bank, in addition to assaulting one of them.

Montaser Sammour, the head of the Jenin office of the Palestinian Prisoners’ Society (PPS), in northern West Bank, said the soldiers abducted a former political prisoner, identified as Mohammad al-‘Amer.

Sammour added that the young man, from the Jenin refugee camp, was abducted by the soldiers at a military roadblock they installed near Arraba town, south of Jenin.

Late on Thursday at night, the soldiers stopped a Palestinian car near the Qalandia terminal, north of occupied Jerusalem, and abducted two young men after forcing them out of their car, in addition to repeatedly assaulting them.

In related news, the soldiers attacked, on Thursday at night, many Palestinians and abducted several others in the yard of Bab al-‘Amoud, in Jerusalem.

On Wednesday, an Israeli colonialist settler many Palestinians and abducted several others in Wadi Hilweh Street in Silwan town, in Jerusalem.

On Wednesday at night, soldiers abducted three Palestinians, including a teenage boy, in addition to assaulting many young men in Jerusalem.