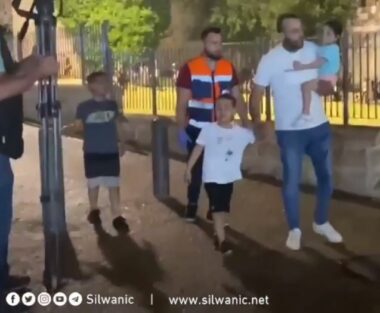 Israeli soldiers attacked, on Thursday at night, many Palestinians and abducted several others in the yard of Bab al-‘Amoud, in the occupied Palestinian capital, Jerusalem.

Eyewitnesses said the soldiers assaulted many Palestinians, especially young men, as they were sitting there after the Muslim Iftar.

They added that the army also sprayed many Palestinians, including families and children, with wastewater mixed with chemicals, in addition to abducting several young men, before taking them to a nearby police station.

On Wednesday, an Israeli colonialist settler attacked a Palestinian man with special needs in Wadi Hilweh Street in Silwan town, in Jerusalem.

On Wednesday at night, soldiers abducted three Palestinians, including a teenage boy, in addition to assaulting many young men in Jerusalem.