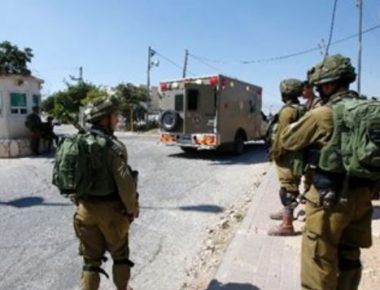 Israeli soldiers abducted, Friday, three Palestinians, including two siblings, from Rommana village, west of the northern West Bank city of Jenin, while working on their lands.

The Jenin office of the Palestinian Prisoners’ Society (PPS) said the soldiers invaded Palestinian lands near Salem military roadblock and abducted the three young men while working on their lands.

The PPS said dozens of soldiers invaded the agricultural lands, and abducted Tareq Sobhi Sbeihat, and his brother Hani, in addition to their cousin Sobhi Emad Sbeihat.

The three were cuffed and blindfolded, before the soldiers took them to Salem military base.

In related news, the soldiers abducted a Palestinian teen near Ni’lin village, west of Ramallah, reportedly after he “attempted to stab them,” at the roadblock leading to an illegal colony, built on the villagers’ lands.

In addition, soldiers shot thirteen Palestinians with live rounds, including a young man who suffered a very serious head injury, after the army, stationed across the border fence, attacked protesters marching on their lands, in several parts of the coastal region.

In Nablus, in northern West Bank, the soldiers shot three Palestinians with live fire, injured another with shrapnel from a concussion grenade, and caused dozens to suffer the effects of teargas inhalation, in several parts of the governorate.

The soldiers also attacked dozens of nonviolent protesters in Ni’lin, Budrus and Bil’in villages, in the Ramallah and al-Biereh governorate, causing many to suffer the severe effects of teargas inhalation.

In addition, the army shot four Palestinians, in addition to causing many to suffer the effects of teargas inhalation at the main entrance of al-Biereh city, in the Ramallah and al-Biereh governorate.