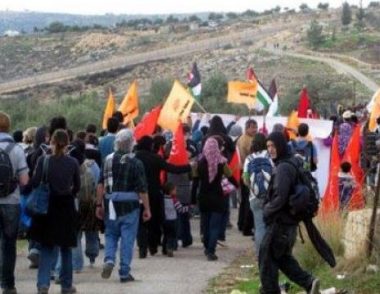 Updated: Israeli soldiers attacked, Friday, dozens of nonviolent protesters in Ni’lin, Budrus and Bil’in villages, in the Ramallah and al-Biereh governorate, in central West Bank, causing many to suffer the severe effects of teargas inhalation.

Mohammad Amira of the Popular Committee against the Annexation Wall in Ni’lin, said the protesters nonviolently marched from the village, while chanting against the ongoing Israeli occupation and oppression, and against the illegal U.S. recognition of unified Jerusalem as the capital of Israel.

Amira added that the protesters also chanted for the freedom of all detainees, especially Ali Salah Amira, only 14 years of age, who was abducted by the soldiers during a nonviolent procession two months ago.

The soldiers fired dozens of gas bombs, rubber-coated steel bullets and sponge-tipped bullets, at the nonviolent protesters causing scores to suffer the effects of teargas inhalation.

Media sources said the soldiers resorted to the excessive use of force against the nonviolent protesters.

The nonviolent protesters marched from the village towards the Annexation Wall, near Abu Lemon area, while chanting against the Israeli occupation and escalations, and Israel’s ongoing illegal colonialist activities.

They also carried Palestinian flags, and posters of many imprisoned nonviolent activists, including ‘Ahed Tamimi and Monther Amira, and chanted for freedom, liberation and independence.