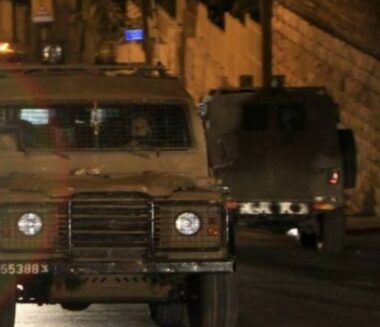 Israeli soldiers abducted, on Thursday at dawn, two young Palestinian men from the Bethlehem governorate, south of occupied Jerusalem, in the West Bank.

They added that the soldiers also abducted Mohammad Wajeeh Thawabta, 20, from Beit Fajjar town, south of Bethlehem, after stopping him at the Container military roadblock, northeast of Bethlehem.

The Palestinian was detained for a few hours at the roadblock before the soldiers moved him to a detention and interrogation facility near Jerusalem.

Also at dawn, the soldiers demolished a Palestinian mosque in Douma town, south of the northern West Bank city of Nablus.