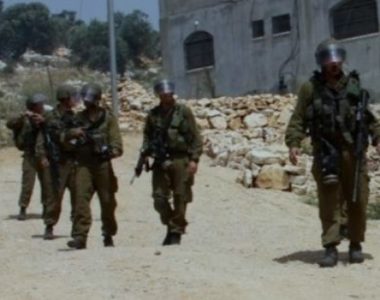 Israeli soldiers abducted, on Tuesday at dawn, two Palestinians, including a former political prisoner, in Hebron and Jenin governorates, in the southern and northern parts of the Gaza Strip.

Media sources in Hebron said the soldiers invaded the al-Fawwar refugee camp, south of the city, searched homes and abducted Ala’ Mohammad at-Teety.

They added that the soldiers invaded several neighborhoods in Hebron city, in addition to surrounding communities, and installed roadblocks at the main roads of Sa’ir and Halhoul towns, north and northeast of the Hebron, before stopping and searching dozens of cars, and interrogated many Palestinians while inspecting their ID cards.

In addition, the soldiers abducted a former political prisoner, identified as Salim Ahmad Walid Ali, from Sanour town, south of Jenin, after stopping him at a military roadblock while heading to Ramallah, in central West Bank.