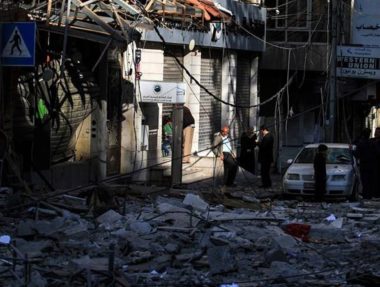 Hours before the announcement of a mutual ceasefire between Palestinian armed groups and Israel, the Israeli forces intensified their aggression against the Gaza Strip at a high rate for 2 consecutive days during which the Israeli forces carried out intensive bombardment through their warplanes and artillery shells in land and sea, targeting more multi-story buildings and houses in a clear violation against Palestinian civilians.

As a result, hundreds of families became homeless and 2 million Palestinians suffered fear and terror. Moreover, the Israeli forces continued using the extrajudicial executions policy, which has been going on in the last years. Focusing on targeting residential buildings and houses on the second day of the offensive, the Israeli forces has began  their aggression with what they ended their aggression in 2014 in which they randomly destroyed dozens of residential buildings on the head of their inhabitants.

Following the press release issued by the Palestinian Center for Human Rights (PCHR) on Saturday, 04 May 2019 and according to fieldworkers’ documenting the incidents of the second day, the Israeli forces’ bombardment resulted at the killing of 23 Palestinians. Fourteen of them were civilians; including 3 women and 3 children. Some of those killed inside their houses were from the same family. Moreover, 44 others were injured. Thus, the total number of killed Palestinians has risen to 23, including 3 women, one of them was pregnant, and 3 children, including a baby girl.

The airstrikes targeted 20 residential houses, a residential building and a mosque; 3 workshops, 20 targeting of empty lands, cars, motorbikes, resorts, and other public and private property in addition to training sites and border control points belonging to Palestinian armed groups. In addition to the artillery shelling that took place in various areas of the eastern Gaza Strip.

For the first time since 2014, the Israeli forces committed a  new crime of the extra-judicial execution, killing of Ahmed al-Khudari after targeting his car in the center of Gaza City.

According to PCHR’s investigations, at approximately 14:45 on Sat 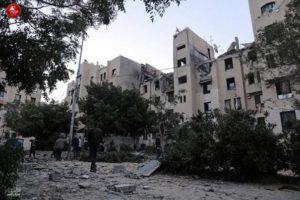 At approximately 22:10 on Saturday evening, 04 May 2019, Israeli drone fired a missile at a group of civilians, who were in the vicinity of the American School former site, west of Beit Lahia, killing Khalid Mohammed Selmi Abu Qaliq (24), from the city, after he was hit with shrapnel throughout his body. Moreover, another civilan was seriously injured.

At approximately 17:35 on Sunday evening, the Israeli forces fired an artillery sheel at a house belonging to Abdul Rahim Mustafa al-Madhoun (60), south of the American School, west of Beit Lahia. As a result,  the house was destroyed  and 4 civilians were killed, including a woman,  and 9 were injured.

Those killed civilians, including Abdul Rahim, were identified as: Abdul Rahim’s son Abdullah Abdul Rahim Mustafa al-Madhooun (21), Fadi Ragheb Yusuf Badran (33), Amani ‘Etfat Sha;ban al-Madhoun (36), who was pregnant at her ninth month. Furthermore, 9 civilians were injured, including 6 children. Doctors classified the injureies of 2 of them as serious.

At approximately 17:45, the Israeli warplenes launched 2 missiles at the ground floor and first floor in Zu’rob’s Building near al-Shuhada’a Square (al-Nejmah), in the center of Rafah. As a result, 3 civlians were killed namely: ‘Ali Ahmed Abdul Jawad (51), who was in al-Awa’el Educational Center, Mousa Husein Lafi Mo’amer (35) and Hani Hamdan Abu Sha’ar (37), who were at al-Fakher Cofe. Moreover, 4 civilians, including a child were sustained various wounds.

The ongoing Israeli offensive disrupted all schools and universities, preventing tens thousands of students from heading to their schools and universities. Moreover, several Governmental and non-Governmental Organizations (NGOs) were disrupted as well. Thus, obstructing the Palestinian civilians’ lives and businesses and undermining their basic rights.

Furthermore, Israeli forces issued a decision to close all crossings from and to Israel, stop the entry and exit of goods, prevent the movement of members, including patients, as well as prevent the entry of fuel into the Gaza Strip.