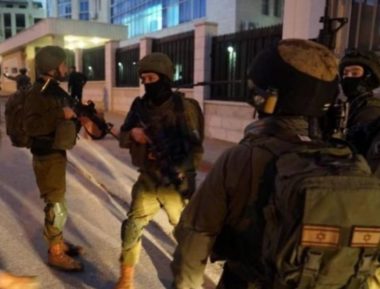 Media sources said the soldiers invaded Be’er al-Hummus area, in the center of Hebron city, before storming and ransacking homes.

They added that the soldiers abducted Haitham Talal as-Sammak, 22, from his home in the city, and took him to a nearby military base.

The soldiers also invaded ‘Aseeda area in Beit Ummar town, north of Hebron, and fired many concussion grenades and gas bombs at Palestinians, who protested the invasion, and several surrounding homes.

In occupied Jerusalem, the soldiers invaded homes in Jabal al-Mokabber town, south of the city, and abducted a child, identified as Yazan Arafat Obeidat.

It is worth mentioning that Yazan is the brother of Mohammad Obeidat, a political prisoner who is serving an 18-year prison sentence in Israeli prisons.