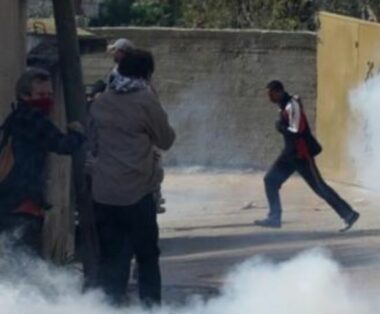 Medical sources said the soldiers shot two Palestinians with rubber-coated steel bullets, and rammed a third with their jeeps before they were rushed to a local hospital.

The soldiers also invaded homes in the old city of Jenin, before abducting a former political prisoner, identified as Osama Nasser Salah.

It is worth mentioning that the soldiers invaded and ransacked many homes in Jenin city, and Toura village, west of the Jenin, and interrogated dozens of Palestinians while inspecting their ID cards.

The soldiers fired many gas bombs in the Eastern Neighborhood, and the al-Marah neighborhood, in Jenin city.

Owners of some of the invaded homes have been identified as Ahmad Roshdi al-Hathnawi, Hassan Jarrar, Jamil Kamel Zayed, Zakariya Yassin Zeid, and Yousef Mohammad Zeid.

In addition, the soldiers invaded Barta’a village, southwest of Jenin, and abducted a child, identified as Nasser Sa’id Kabaha, 15, while crossing the military roadblock at the entrance of his town, while he was heading home.

In the Gaza Strip, Israeli navy ships attacked Palestinian fishing boats in Gaza territorial waters, in the southern part of the besieged coastal region, and near Gaza city.