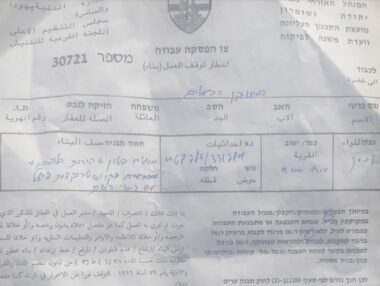 Israeli soldiers invaded, Sunday, the town of Sorra, west of the northern West Bank city of Nablus, and handed seven locals military orders halting the construction of their homes.

Morad Eshteiwi, the head of the “Wall And Colonization Resistance Commission” in northern West Bank, said the soldiers halted the construction of seven Palestinian homes near the illegal Havat Gilad colony, which was built on stolen lands.

The army claimed the homes were being built without permits from the “Civil Administration Office,” the administrative branch of Israel’s illegal occupation of the West Bank, although they received the needed permits from the Local Town Council.

While Israel continues to build and expand its illegal colonies, and retroactively license the outposts, all built in direct violation of International Law and the Fourth Geneva Convention, it continues to prevent the Palestinians from constructing on their lands in Area C (about %60) of the West Bank.