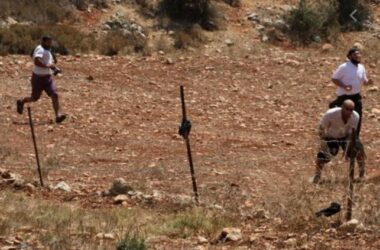 A group of fanatic Israeli colonists, illegally squatting on private Palestinian lands, attacked many shepherds, Sunday, in the Masafer Yatta area, south of the southern West Bank city of Hebron.

Fuad al-Amour, the head of the “Protection and Steadfastness Committee” in Masafer Yatta and Southern Hebron Hills, said the colonists came from Havat Ma’on illegal colony, which was built on stolen Palestinian lands.

He added that the colonists harassed and physically attacked many shepherds and forced them out of grazing lands, east of the Tiwana village, in Masafer Yatta.

The colonists also hurled stones at the shepherds and many locals on their lands.

Israel’s colonies and outposts in the West Bank, including those in and around the occupied Palestinian capital, Jerusalem, are illegal under International Law, the Fourth Geneva Convention to which Israel is a signatory and a constant violator, in addition to various United Nations and Security Council resolutions.