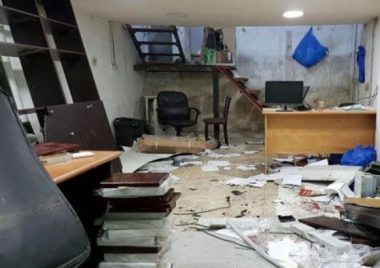 Israeli soldiers invaded, on Thursday at dawn, many homes in Kufur Qaddoum town, in Qalqilia district, in the northern part of the occupied West Bank, and abducted two Palestinians. The army also invaded two print shop in nearby Tulkarem district, and confiscated their equipment and contents.

The Qalqilia office of the Palestinian Prisoners’ Society (PPS) said a large military force surrounded Kufur Qaddoum, before invading it from several directions.

It added that the soldiers broke into, and violently searched homes in the town, including using K-9 units, causing anxiety attacks among the children.

The abducted Palestinians have been identified as Ayman Rafiq Eshteiwy, 40, and Nader ‘Amer, 27; they were cuffed and blindfolded before the soldiers took them to an unknown destination.

The soldiers violently searched the print shops, causing excessive damage, and confiscated machines and computers, in addition to tax documents.

| Israeli Soldiers Abduct A Legislator, Confiscate His Car, In Jenin|