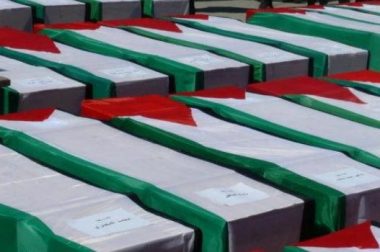 Several Palestinians were shot with rubber-coated steel bullets, and many others suffered the effects of teargas inhalation, Wednesday, after Israeli soldiers attacked a nonviolent protest, demanding Israel to return the bodies of four slain Palestinians.

The procession, organized by several factions and various institutions in Bethlehem, started at the northern entrance of Bethlehem, close to the Annexation Wall, and was attended by dozens of Palestinians, including officials and the head of the Detainees Committee, Issa Qaraqe.

It took place while the Israeli Supreme Court was holding a session to discuss an appeal filed by the “National Committee for Retrieving the Bodies of Martyrs,” demanding the release of the remains of four Palestinians, from Bethlehem district.

The protesters carried signs, and chanted slogans, demanding the immediate release of the remains, and to void Israeli decisions holding them captive, as a measure of collective punishment against their families.

The court granted the Israeli Prosecutor’s Office 45 days to provide a legal reason for holding the corpses of four Palestinians from Bethlehem, instead of transferring them to their families for burial.

The organizers of the protest said that there is no legal reason for holding the corpses captive for any period of time, and that Israel is just punishing their families and loved ones, and prolonging their suffering.