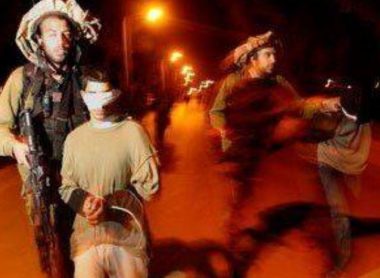 Israeli soldiers abducted, on Monday at dawn, two young Palestinian men, and injured another, in the southern West Bank governorate of Hebron.

They added that the soldiers also shot Mohammad Ali Abu ‘Aisha, 24, with a live round in his leg, before he was rushed to a local hospital, suffering a moderate injury.

The soldiers also installed roadblocks closing the northern entrances of Hebron city, in addition to Halhoul and Sa’ir town, before stopping and searching dozens of cars while inspecting the ID cards of the passengers.

On Monday evening, the soldiers abducted a young Palestinian man, who remained unidentified at the time of this report, after stopping him at the Container military roadblock, north of Bethlehem.

The army claimed the Palestinian was not carrying any form of identification, and was “concealing a knife.”