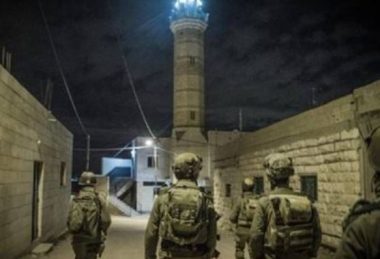 The Jenin office of the Palestinian Prisoners’ Society (PPS) said the soldiers invaded and ransacked many homes, interrogated several Palestinians in the city, in addition to Qabatia town, Sanour and al-‘Arqa village, and abducted six.

It said the soldiers abducted Hisham Omar Zakarna, from Qabatia, in addition to Laith Fuad and Tareq Ziad Gharbiyya, from Sanour village.

The soldiers also invaded the Eastern Neighborhood in Jenin, and the al-‘Arqa village, west of the city.