Army Abducts Two Palestinians Near Jenin, Injures Many In Jericho 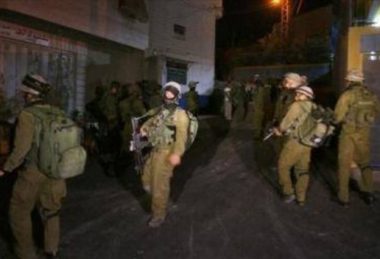 Media sources in Jenin said the soldiers invaded and searched many homes, and abducted Mahmoud Emad Kamil, from Qabatia, and Yazan Mughayer, from ‘Arraba.

The soldiers also installed many roadblocks, amidst extensive military deployment around many villages and towns, in Jenin.

In related news, the soldiers invaded Katef al-Wad area, in Jericho city, in northeastern West Bank, and moderately injured several Palestinians with live fire, in addition to causing many others to suffer the effects of teargas inhalation.

The Palestinians, who were shot with live fire, received treatment at a hospital in Jericho, before being transferred to a hospital in Ramallah, in central West Bank.