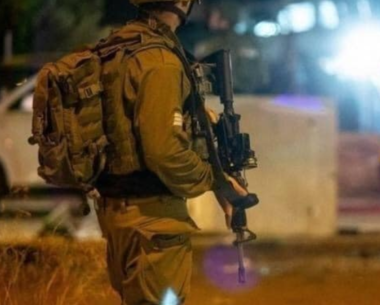 The soldiers also fired gas bombs and concussion grenades at several Palestinians who protested the invasion.

Furthermore, the soldiers abducted one Palestinian, who remained unidentified at the time of this report, after stopping him on the bypass road #60 near Beit ‘Einoun town, northeast of Hebron. The army claimed the young man attempted to stab an officer.

In addition, the soldiers invaded Jenin city in northern West Bank, and Jaba’ town, south of the city, and shot one Palestinian with a live round in addition to abducting three others from their homes.

In related news, the soldiers abducted two Palestinians, including a child, from their homes in Beit Fajjar town, south of Bethlehem, in the occupied West Bank.