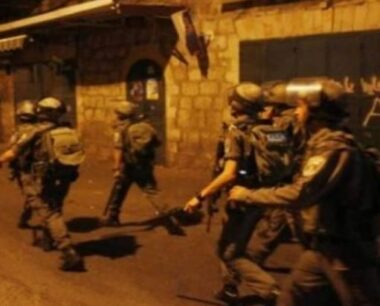 Israeli soldiers invaded, on Monday at dawn, Jenin city in northern West Bank, and Jaba’ town, south of the city, and shot one Palestinian with a live round in addition to abducting three others from their homes.

Media sources in Jenin said the soldiers invaded the Khallet as-Soha neighborhood in the city, and fired live round, gas bombs and concussion grenades at Palestinians protesting the invasion.

They added that the soldiers shot Ra’fat Omar ‘Aqel, 18, with a live round in the abdomen, before he was rushed to Khalil Suleiman governmental hospital, suffering moderate wounds.

The soldiers also invaded the as-Sikka neighborhood in Jenin, and abducted Amad Khairi Khalaf, after storming his home and searching it.

The soldiers also fired gas bombs and rubber-coated steel bullets at many Palestinians who protested the invasion.

In related news, the soldiers abducted two Palestinians, including a child, from their homes in Beit Fajjar town, south of Bethlehem, in the occupied West Bank.