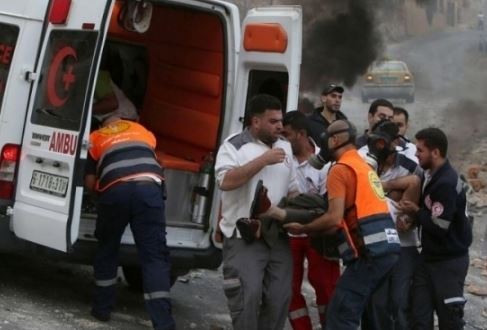 Updated: Israeli soldiers invaded, on Wednesday at dawn, Kafr Thulth town, east of the northern West Bank city of Qalqilia, assaulted and seriously wounded one Palestinian in his home. The soldiers also shot and injured three Palestinian near Tubas, in central West Bank.

Palestinian medical sources in Qalqilia said the soldiers invaded the home of Zoheir Barakat, and violently assaulted him while searching his property, causing various serious injuries.

The sources added that the Palestinian was first moved to Darwish Nazzal governmental hospital in Qalqilia before he was transferred to another hospital out of Qalqilia due to the severity of his wounds.

In related news, several Israeli military vehicles invaded the al-Far’a refugee camp, south of the central West Bank city of Tubas, before the soldiers stormed and ransacked a number of homes.

The invasion led to clashes with local youths, who hurled stones at the military jeeps, while the soldiers fired live rounds, rubber-coated steel bullets, and gas bombs.

Medical sources said three young men were shot with live rounds, and a woman suffered the effects of teargas inhalation before they were moved to medical centers.