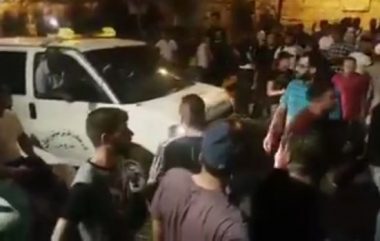 Israeli soldiers injured, on Sunday at night, at least 35 Palestinians, including one who suffered a life-threatening injury after being shot with a rubber-coated steel bullet in the eye, after the army attack a funeral procession in occupied East Jerusalem.

The incident took place in the Tribes Gate area, in Jerusalem, while dozens of residents marched in the funeral procession of a young man, identified as Ali Abu Gharbiyya, who downed to death several days ago while swimming in Tiberius Sea.

One Palestinian was shot with a rubber-coated steel bullet in one of his eyes, also leading to hemorrhage in his brain, before he was moved to Hadassah Medical Center in Jerusalem, in a serious condition.

At least ten other Palestinians were shot with rubber-coated steel bullets, and others were assaulted and clubbed by the soldiers, before medics moved them to local hospitals and clinics, while nearly 24 Palestinians suffered the severe effects of teargas inhalation.

Local sources said the clashes took place after the soldiers, and police officers, assaulted the funeral procession to remove Palestinian flags that were raised by several marchers, and to silence the residents who chanted for the liberation of Palestine.