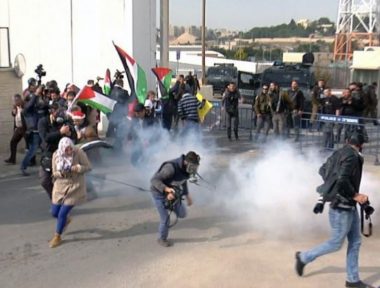 Israeli soldiers resorted to the excessive use of force, Saturday, against nonviolent protesters in Bani Neim town, east of the southern West Bank city of Hebron, attacked many journalists and abducted one of them.

The soldiers assaulted dozens of locals and international peace activists, who nonviolently protested the Israeli army’s illegal annexation of Palestinian lands in Bani Neim, and fired many gas bombs and rubber-coated steel bullets at them.

The army also dragged and removed many protesters, attacked several journalists, and prevented them from performing their duties.

Furthermore, the soldiers assaulted and abducted photojournalist Eyad al-Hashlamoun, after alleging that he “entered a closed military zone.”

It is worth mentioning that the army frequently declares Palestinian lands and entire communities as “closed military zones,” before assaulting and abducting the locals, and their supporters.