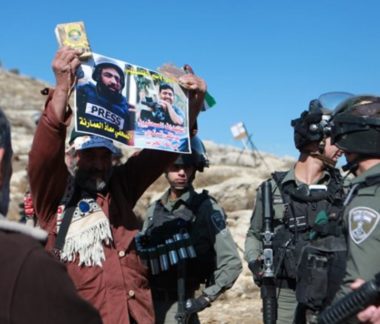 Israeli soldiers attacked, Friday, a nonviolent procession against the illegal annexation of Palestinian lands in Surif town, northwest of the southern West Bank city of Hebron, causing many injuries.

The soldiers fired a barrage of gas bombs and concussion grenades, in addition to attacking protesters with clubs and batons.

Many Palestinians sustained cuts and bruises, while several others suffered the effects of teargas inhalation.

The nonviolent procession started when the residents held Friday noon prayers on lands Israel intends to illegally annex for its colonies and military purposes, in direct violation of International Law and the Fourth Geneva Conventions.

The procession also came in solidarity with Palestinian photojournalist Moath Amarneh, who lost his left eye after the soldiers shot him, last Friday.