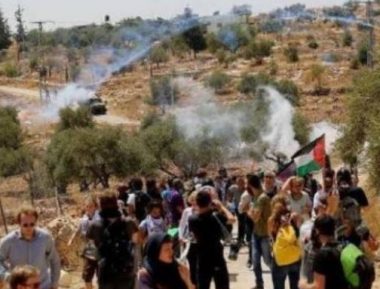 Israeli soldiers attacked, Friday, dozens of Palestinian and international peace activists, holding the weekly nonviolent procession against the Annexation Wall and Colonies in Ni’lin village, west of the central West Bank city of Ramallah, causing many to suffer the effects of teargas inhalation.

The protesters marched from the center of the village heading towards the villagers’ lands, largely isolated by the Annexation Wall, while carrying Palestinian flags and chanting for liberation and independence.

They chanted for the release of all detainees, especially the world-renowned teen journalist and nonviolent activist, ‘Ahed Tamimi, in addition to Israa’ Ja’abis, and against the illegal U.S. recognition of occupied Jerusalem as the unified capital of Israel.

The army resorted to the excessive use of force against the nonviolent protesters and fired dozens of gas bombs and concussion grenades, causing many to suffer the effects of teargas inhalation.

The soldiers also chased many protesters, but were unable to abduct any of them, while one child fell and suffered a head injury, in addition to cuts and bruises, after his dead slammed against a rock.