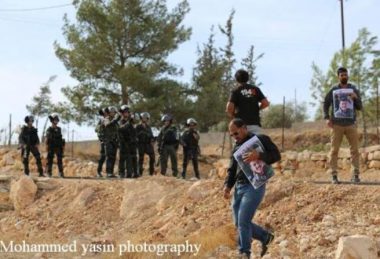 Israeli soldiers attacked, Friday, many Palestinian and international peace activists, holding the weekly nonviolent protest against the Annexation Wall and colonies, in Ni’lin village, west of Ramallah, causing many to suffer the effects of teargas inhalation.

Mohammad Amira, the coordinator of the Popular Committee against the Wall and Colonies in Ni’lin, said the soldiers assaulted the nonviolent protesters, and fired many gas bombs and concussion grenades at them, just as they approached the wall’s construction site, on the villagers’ orchards, south of the Ni’lin.

He added that many nonviolent protesters suffered the effects of teargas inhalation, and received the needed treatment by local medics.

The procession started from the center of the village, when locals, Israeli and international activists marched carrying Palestinian flags, and chanting against the ongoing occupation.

They also marched in solidarity with the detainees in the Negev detention camp, who are currently subject to attacks, and escalating violations.