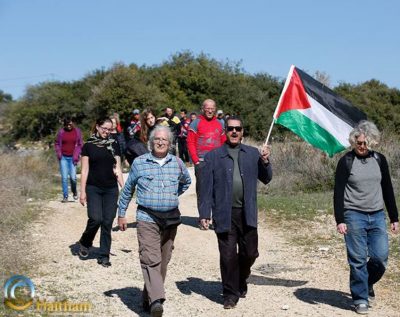 Many Palestinian, Israeli and international peace activists marched, Friday, in the weekly nonviolent procession against the Israeli Annexation Wall and colonies, in Bil’in village, west of Ramallah, in the occupied West Bank.

The Popular Committee against the Wall and Colonies in Bil’in said this week’s protest comes in solidarity with the Palestinian detainees, in the Negev and Nafha detention camps, subject to escalating assaults and violations.

It added that the procession started from the center of the village, following noon prayers, before locals, Israeli and international peace activists marched towards the villager’s orchards, isolated behind the Wall.

They marched carrying posters of many detainees, and Palestinian flags, and chanted for their unconditional release.

Abdullah Abu Rahma, the coordinator of the Popular Committee in Bil’in, denounced the repeated and escalating attacks against the detainees, and stated that they represented further forms of punishment against them, besides their harsh living conditions. Abu Rahma called for increasing the popular resistance activities against the Israeli occupation, and the ongoing construction and expansion of the illegal colonies, in the occupied West Bank, including in and around occupied East Jerusalem.

He added that the ongoing protests in Bil’in managed to achieve some successes, including having lands returned to their owners, and obliging Israel to reroute the Wall in certain areas.

Also on Friday, the soldiers attacked many Palestinian and international peace activists, holding the weekly nonviolent protest against the Annexation Wall and colonies, in Ni’lin village, west of Ramallah, causing many to suffer the effects of teargas inhalation.