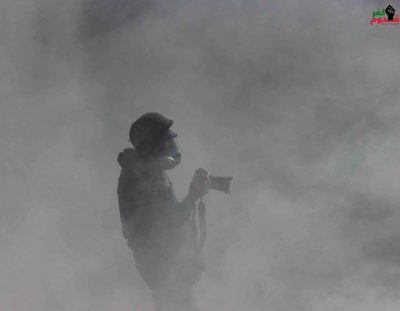 Many Palestinian and international activists suffered, Friday, the severe effects of teargas inhalation, after Israeli soldiers assaulted the weekly procession against the Annexation Wall and colonies, in Kufur Qaddoum, in the northern West Bank district of Qalqilia.

Morad Eshteiwy, the coordinator of the Popular Committee against the Wall and Colonies in Kufur Qaddoum, stated that dozens of soldiers, and officers of the so-called Border Guard Units, invaded the town, using armored vehicles, including a huge military bulldozer.

He added that the soldiers fired many rubber-coated steel bullets, gas bombs and concussion grenades, causing dozens to suffer the effects of teargas inhalation. Eshteiwy also stated that the procession started from the center of the village, in participation with Israeli and international peace activists, who all marched chanting against the occupation, and the racist Israeli policies, especially the escalating violations in the Negev, and various parts of historic Palestine.

The soldiers used excessive force against the protesters, also broke into the yard of a local home, owned by Abdul-Latif Obeid, and used it as a military post, and a firing zone to target the protesters, including youngsters who hurled stones at the invading army vehicles.

Also on Friday, nonviolent protests were held in Bil’in and Ni’lin villages, in the central West Bank district of Ramallah.