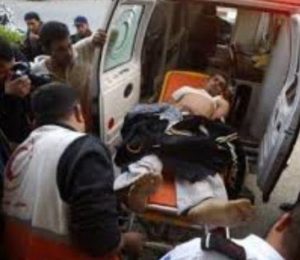 Israeli soldiers shot, Friday, a Palestinian teen with live fire, during clashes that took place between many youngsters and the soldiers, stationed across the border fence, in central Gaza.

Dr. Ashraf Al-Qedra, spokesperson of the Health Ministry in Gaza, said the soldiers shot a 16-year-old with a live round in the abdomen, before local medics moved him to the Al-Aqsa Hospital.

He added that the incident took place in Palestinian lands, in Um Hosniyya Hill area, close to the border fence, east of the al-Boreij refugee camp, in central Gaza.

Eyewitnesses said the soldiers were heavily deployed across the border fence in the area, and fired many live rounds, rubber-coated steel bullets and gas bombs, at many protesters who marched in the area.