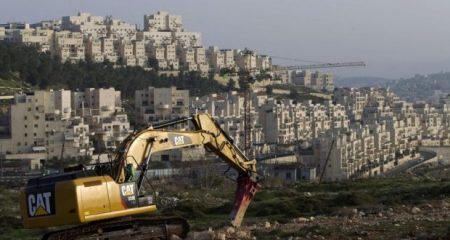 United Nations Special Rapporteur Michael Lynk has called on the UN Security Council and the General Assembly to explore effective diplomatic and political measures to ensure Israeli compliance with Security Council resolution 2334, which affirms that all Israeli settlements in the occupied Palestinian territory constitute a flagrant violation of international law.

“The settlement announcements by the Israeli government, only a month after the clear direction of the international community, are a defiant and troubling repudiation of resolution 2334,” the independent expert stated, according to the PNN.

“If Israel understands that the international community will take no meaningful steps to enforce the Council’s resolution, it will continue to intensify its settlement project undeterred,” the rapporteur warned.

“And, if the international community intends to preserve what remains of a viable two-state solution, it must not assume that resolutions, critical statements and international conferences alone will change state behaviour in these circumstances,” he underscored.

Lynk’s appeal comes as the Israeli state approves the construction of over 6,000 new settlement homes in the occupied West Bank and East Jerusalem, and as the Israeli Knesset moves closer to adopting the ‘Settlement Regularization Bill’, which will legalize the homes of more than 4,000 settlers in dozens of illegal outposts built on private Palestinian lands throughout the West Bank.

These outposts, while built without formal authorization under Israeli law, have enjoyed the political and material support of successive Israeli governments, Mr. Lynk observed.

“The Security Council resolution was very clear,” he said. “It called on Israel to ‘immediately and completely cease all settlement activities in the occupied Palestinian territory, including East Jerusalem, and that it fully respects all of its legal obligations in this regard.”

“Continued settlement activity poses a grave threat to Palestinians’ right to self-determination,” the special rapporteur noted. “The settlements, which divide up the West Bank and create barriers and obstacles to the movement of Palestinians in their own territory, also undermine the right of Palestinians to work, healthcare, education, and family life.”

Mr. Lynk recalled that settlements, illegal under international law, constitute a major obstacle to the achievement of the two-state solution and a just, lasting and comprehensive peace.

“The policies and practices of the Israeli authorities that suggest an advance towards de facto annexation of parts of the West Bank are increasingly alarming,” the expert said. He noted that, in recent months, senior Israeli political leaders have made explicit statements openly supporting annexation, as in the case of the Ma’ale Adumim settlement (near Jerusalem) and other settlement blocs within Area C in the West Bank.

“Annexation of occupied land likewise is a grave breach of international law,” the Special Rapporteur stated. “Security Council Resolution 2334 reaffirmed the long-standing legal principle that the acquisition of territory by force is inadmissible,” he recalled.

In 2016, the UN Human Rights Council designated Mr. Michael Lynk (Canada) as the seventh Special Rapporteur on the situation of human rights in the Palestinian territories occupied since 1967. The mandate was originally established in 1993 by the then UN Commission on Human Rights.

As Special Rapporteur, Mr. Lynk is part of what is known as the Special Procedures of the Human Rights Council. Special Procedures, the largest body of independent experts in the UN Human Rights system, is the general name of the Council’s independent fact-finding and monitoring mechanisms that address either specific country situations or thematic issues in all parts of the world.

Special Procedures experts work on a voluntary basis; they are not UN staff and do not receive a salary for their work. They are independent from any government or organization and serve in their individual capacity.